We and our partners use cookies to Store and/or access information on a device.We and our partners use data for Personalised ads and content, ad and content measurement, audience insights and product development.An example of data being processed may be a unique identifier stored in a cookie. Some of our partners may process your data as a part of their legitimate business interest without asking for consent. To view the purposes they believe they have legitimate interest for, or to object to this data processing use the vendor list link below. The consent submitted will only be used for data processing originating from this website. If you would like to change your settings or withdraw consent at any time, the link to do so is in our privacy policy accessible from our home page.

Finding the right filtration system for your aquarium is one of the trickiest aspects of this hobby. I spent a long time tinkering with various additives, filters, and tank occupants before I finally stumbled across macroalgae.

When added to a refugium, macros can reduce nitrate and ammonia levels, prevent negative algae bloom, and facilitate the growth of helpful organisms.

This article will examine the different kinds of macroalgae and help you find the best macroalgae for refugium filtration that will fit your needs.

We often associate the word “algae” with the slimy scum you see on the top of ponds or the green, fuzzy nuisance that likes to creep up aquarium walls.

This kind of algae is microalgae, not macroalgae. Microalgae is actually vital to the survival of our planet, as it produces 50% of the oxygen released into the atmosphere and it is the first link in the food chain for almost all lake and ocean ecosystems. While microalgae may be helpful for the planet, it’s not something that you want to find in your aquarium. Macroalgae, on the other hand, can be incredibly beneficial.

Macroalgae are large-celled organisms that absorb nutrients through the cell structures along their surface. They come in all shapes and sizes and can often look like plants, seaweed, or sometimes even coral and appear very different from the slime-like substance of microalgae.

Macroalgae is divided into 3 different types:

Green macroalgae are the most common type used in a refugium. This is because, while they often aren’t the most decorative organisms, they grow quickly and can filter out large quantities of unwanted nutrients quickly.

Red macroalgae, as a whole, tends to be more ornamental and therefore often used in the main tank, though there are a few varieties that work well in a refugium for long-term nutrient absorption.

Brown macroalgae are exclusively freshwater organisms which doesn’t help us much at all.

Macroalgae can be further broken down into three categories depending on the speed of their filtration:

Consistent Macros: These are fast-growing macroalgae that need high levels of nutrients to thrive.

Middle of the Road: these macros can grow quickly if there are high levels of nutrients available, but they can also handle periods of low nutrient levels.

Pulse: These macroalgae grow slowly, which means they aren’t very useful in dealing with nutrient spikes, but they are generally long-lived and do well in low nutrient environments.

What Does Macroalgae Do in a Refugium?

Macroalgae play an important role in maintaining an effective refugium by regulating nutrient levels and providing shelter for invertebrates which can further clean your water and act as a food source for your fish.

Macros thrive on nutrients like ammonia, nitrogen, and phosphate; chemicals that aquarium owners often struggle to control. These are potentially harmful to fish and corals in high quantities and can promote microalgae growth which can quickly take over a tank.

As macroalgae grow, they remove these chemicals from the water as it flows through the refugium. This provides a natural filtration system that can also turn into a food source since many macros can be eaten by tangs and other plant-loving fish. Additionally, macroalgae are often necessary for growing copepod colonies.

Copepods are microscopic invertebrates that are eaten by fish such as mandarins, tangs, wrasses, gobies, and seahorses. Many aquarium enthusiasts choose to grow their own copepods to save money and because copepods remove excess food, bacteria, and detritus in the refugium.

Copepods need surface area and shelter to grow, and complex macroalgae such as Chaetomorpha often provide the perfect environment for invertebrates to thrive.

What Are The Best Macroalgae For A Refugium?

The best macroalgae for refugium filtration will differ depending on your unique setup. However, most hobbyists look for a mix of high and low nutrient-dependent varieties that can provide a good home for invertebrates.

Here are some of the most popular varieties of macroalgae used in most refugiums:

Often referred to as Chaeto, this is probably the go-to macroalgae for refugium systems. Its popularity lies in the fact that it’s easy to obtain, makes quick work of high nitrate levels, and is an ideal environment for copepods. 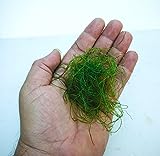 is a green macro that doesn’t need to be anchored to anything, so it often works well floating on top of a refugium where the bottom is taken up with other macroalgae that need anchoring rocks.

The biggest benefit of this macro is that it doesn’t “go sexual” or eject spores into the water and die. When this happens to algae, all the nutrients they’ve been absorbing are released back into the system, and the sudden spike can be harmful or even deadly to the tank’s occupants.

Since Chaeto needs such high levels of nitrates to thrive, it doesn’t do well once your system balances out. This is why it’s recommended to mix low and high nutrient-dependent algae in your refugium. If, however, you were to choose a single macroalgae, Chaeto would be the one to go with.

This is another fast-growing green macroalgae that provide a good home for copepods and other invertebrates. Unfortunately, this macro can grow too quickly and will often crowd out other macros in the refugium, though the fast growth makes it ideal for correcting high spikes in nitrates and ammonia.

Unlike Chaeto, Caulerpa needs to be anchored on a rock or other hard surface. It will also “go sexual” once it reaches a certain point in its life cycle which, as previously mentioned, can be very dangerous for your tank. In order to prevent this, you will need to closely monitor your Caulerpa and frequently remove any old or maturing sections.

This is a slow-growing red macroalgae that is often included in main tanks due to its ornamental nature. However, it’s also a popular addition to refugium tanks as it tends to have a longer life span than Chaeto or Caulerpa and can continue to thrive after the levels in your tank have evened out.

Dragon’s Tongue can be anchored or free-floating and does well in low-light situations, which makes it a good long-term resident in the shady areas of your refugium.

Most macroalgae are fairly easy to grow and only need a light source and the nutrients already in your tank. Supplying a light that spikes in the blue and red ranges will promote faster and healthier macro growth.

If you notice your macroalgae aren’t growing well, try testing to water to evaluate the nutrient and trace element levels. Supplements can provide any missing nutrients, or you can try adding some phytoplankton to the water. This will promote a healthy natural food chain which will increase the nutrient levels in the water that your macros need to thrive.

A self-sustaining system is a pinnacle that all aquarium enthusiasts hope to achieve. While it’s impossible to get a completely hands-off tank established, adding macroalgae to your refugium will go a long way to achieving this goal.

Macroalgae will filter out harmful nutrient levels, provide shelter for invertebrates, and can often become fish food as well. There is a wide variety of macros available, but hopefully, this guide will enable you to find the best macroalgae for refugium enhancement that will allow your aquarium to thrive.

Why Is My Goldfish Turning Black

How to Clean Aquarium Sand

Related deals
We will be happy to hear your thoughts

This site uses Akismet to reduce spam. Learn how your comment data is processed.